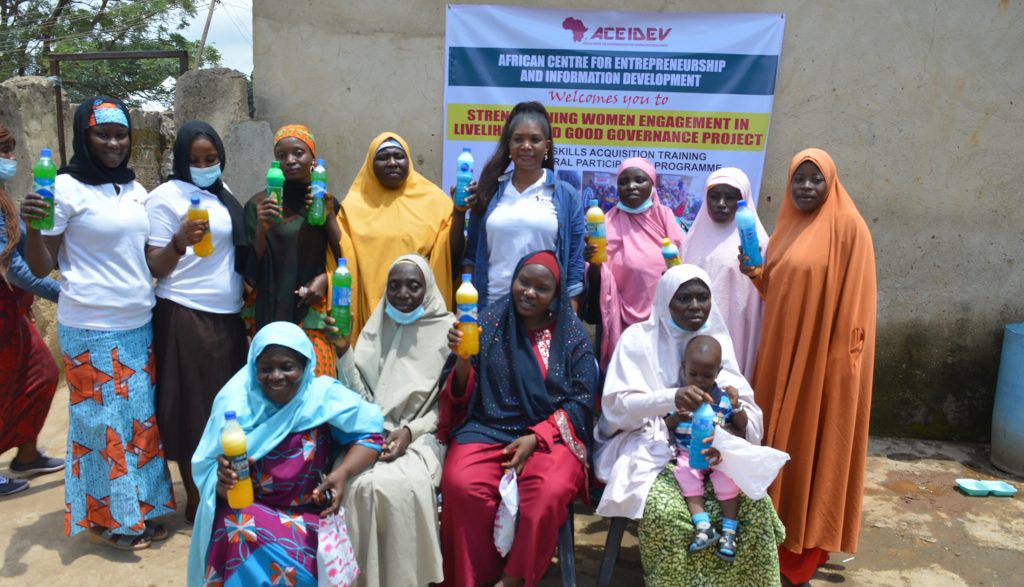 The second batch of the strengthening women engagement in livelihood and good governance project training continued on Tuesday, 14th of September 2021. The second training is aimed at further deepening participants’ skills in the production of household consumables items that will guarantee steady source of income to help the women have improved livelihood and contribute to their respective family needs.

In achieving this, the participants were grouped into electoral wards namely Kawu, Kuduru and Shere wards all in Bwari Areal Council of the FCT. Each wards were made to recap the processes of producing liquid soap based on what they learnt from previous training by themselves. Each participant was given an opportunity to carry-out one function or the other. Nobody was left idle in the whole process of “Do it yourself” 25kg of liquid soap production per group.

The facilitator Mrs. Laura Adebayo, coordinated the participants through the identification of basic ingredients for soap production all by themselves, with the women, taking time and turn to identify the materials one after the other. Based on the already created groups, the women were given the materials to produce the liquid soap on their own under the supervision of their chosen group leaders and the watchful eyes of the facilitator. Different colours were used for quick identification of which group produced what.

In the “Do it yourself” process phase, the women were able to recap their training experience from their presentation in this manner;

The women were made to do a recap of what they produced by appointing a group leader (the presenter) and an assistant. The leaders as selected from various wards made their presentations in turns; Shere, Kawu, and Kuduru. After the presentation by the various group leaders, the facilitator; Mrs. Laura Adebayo, was able make corrections, add light to were each presenter erred or did not include in their speeches for better understanding.

The women where further trained on the methodology for branding and marketing techniques that will assist them in earning income based on the knowledge acquired. The Executive Director of Exceral International Centre, Mr. Jet Philips, motivated the women to appreciate the economic potentials of the product they have just made. He made them to understand that soap in whatever form or shape is a daily domestic requirement that cannot not be neglected, hence, there are always a ready-made and willing market for the product they have. He encourage them to start aggressive marketing of their products starting from their immediate neighbourhood, to schools, hospitals to both private and public offices to establish  their client bases.

Finally, he stressed the need of them to work as a group to engender peer review, accountability and support system for members of the group with the ultimate aim of registering as a cooperative society that will position them to attracting loan from government policies and programmes.

Commenting on the training exercise, the Executive Director of ACEIDEV, James Ugochukwu, expressed satisfaction on the level of assimilation of the participants during the continuous training programme. He reiterated the commitment of ACEIDEV to continue to building their capacity on various entrepreneurial skills that will build their resilience against electoral corruption. He stressed the need for the women to take the training seriously as the skills acquired so far will help them earn steady income and also position them to resist vote buying during elections and make better demands from those in authority through community charter of demand.

The women expressed their various gratitude and prayers. Being so delighted to be participants of the training. Being a paradigm shift, from the norms of politicians and other organisations who would come and woo them of such and it ends in oblivion. The comments, gratitude, prayers and testimonies are all capture in videos and can be accessed from our youtube channels.

ACEIDEV will continue to develop the capacity of the women to grow their new ventures to start earning income that can be scaled up to something bigger that can form formidable and steady income to members of the groups.

No comments to show.

Support Us Today and Make an Impact Tommorrow

We are measured and rewarded by the number of lives we change and make impact. Your  widow’s might is someone else luxury. We are sacrificing more for God and country, you too can do same and put smiles on the face of someone whose last smile was with tears. Offer hope and dignity to the thousands of people on our programs and projects. Together we can make the world a better place!